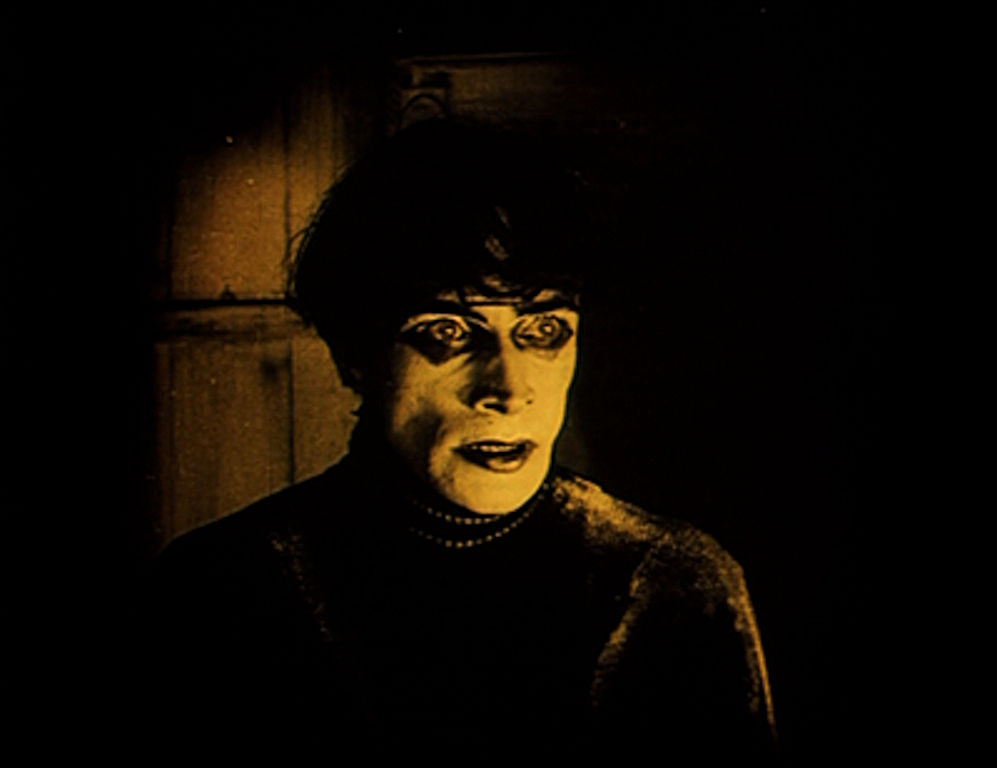 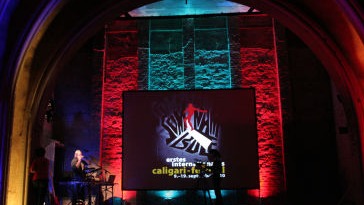 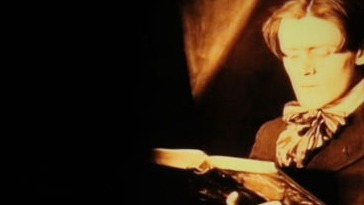 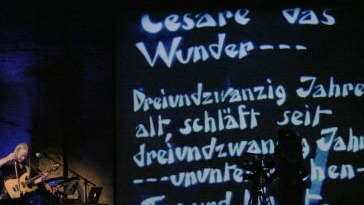 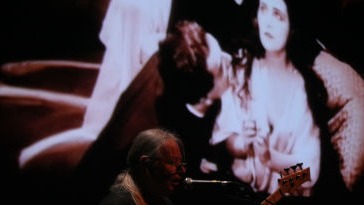 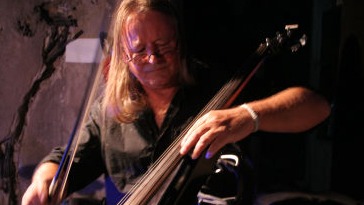 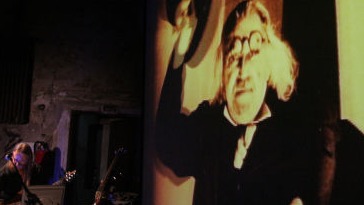 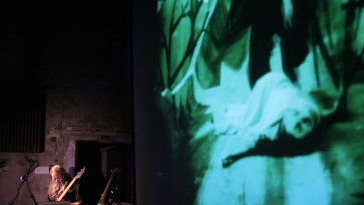 After his work with Art Zoyd on Nosferatu (Murnau), Faust (Murnau), Häxan (Christensen), three film-concerts produced between 1989 and 1996,
Thierry zaboitzeff, fifteen years later, is back at it.
This time he is alone on the stage, surrounded by a complete arsenal of high-tech equipment yet including his favourite instruments: cello, bass, percussion, guitar and his voice...

The Cabinet of Dr. Caligari : Cine-concert by Thierry Zaboitzeff (ex-Art-Zoyd)
adapted from the eponymous film by Robert Wiene (1920) filmed by Jakobine Motz. 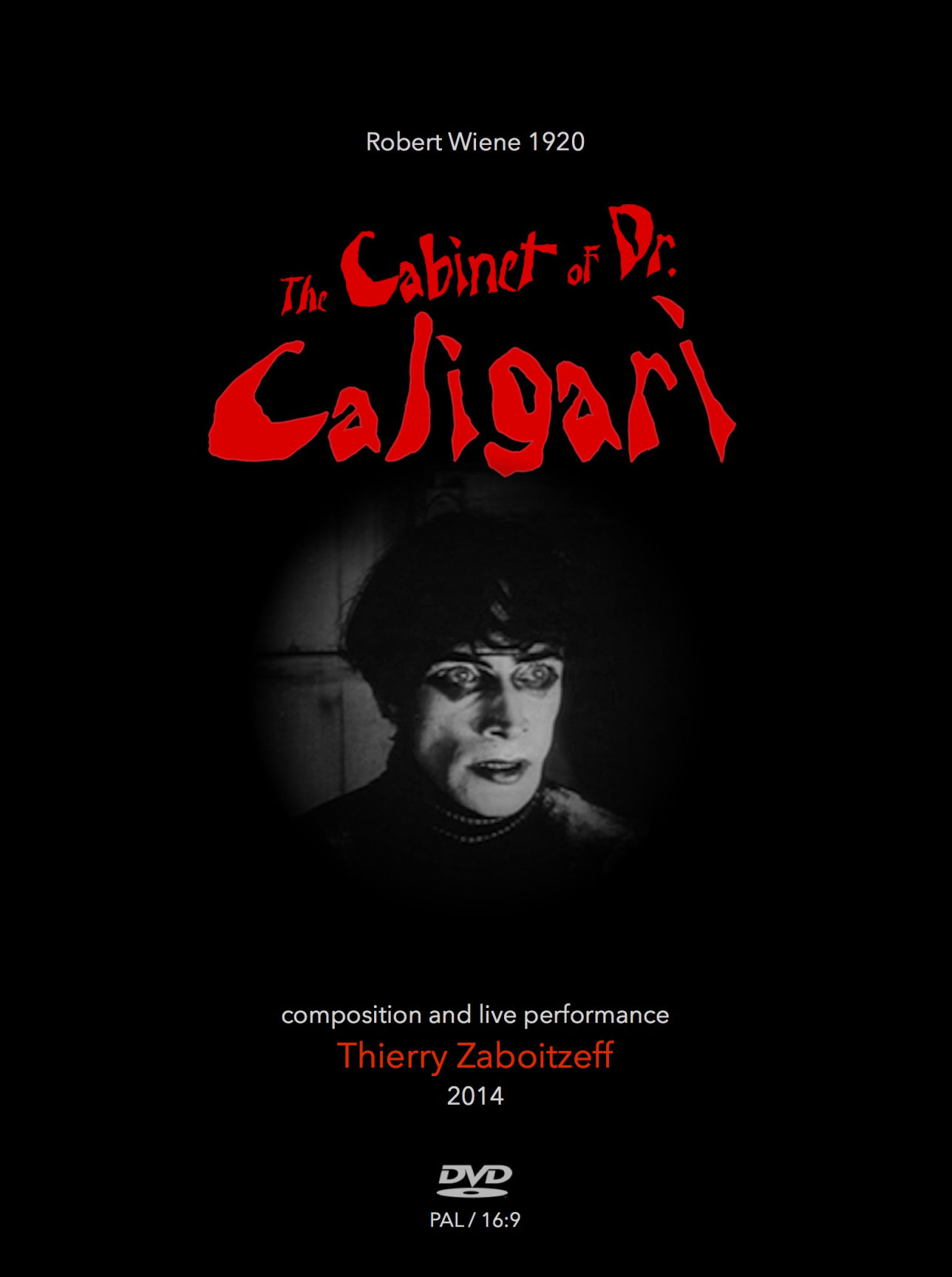 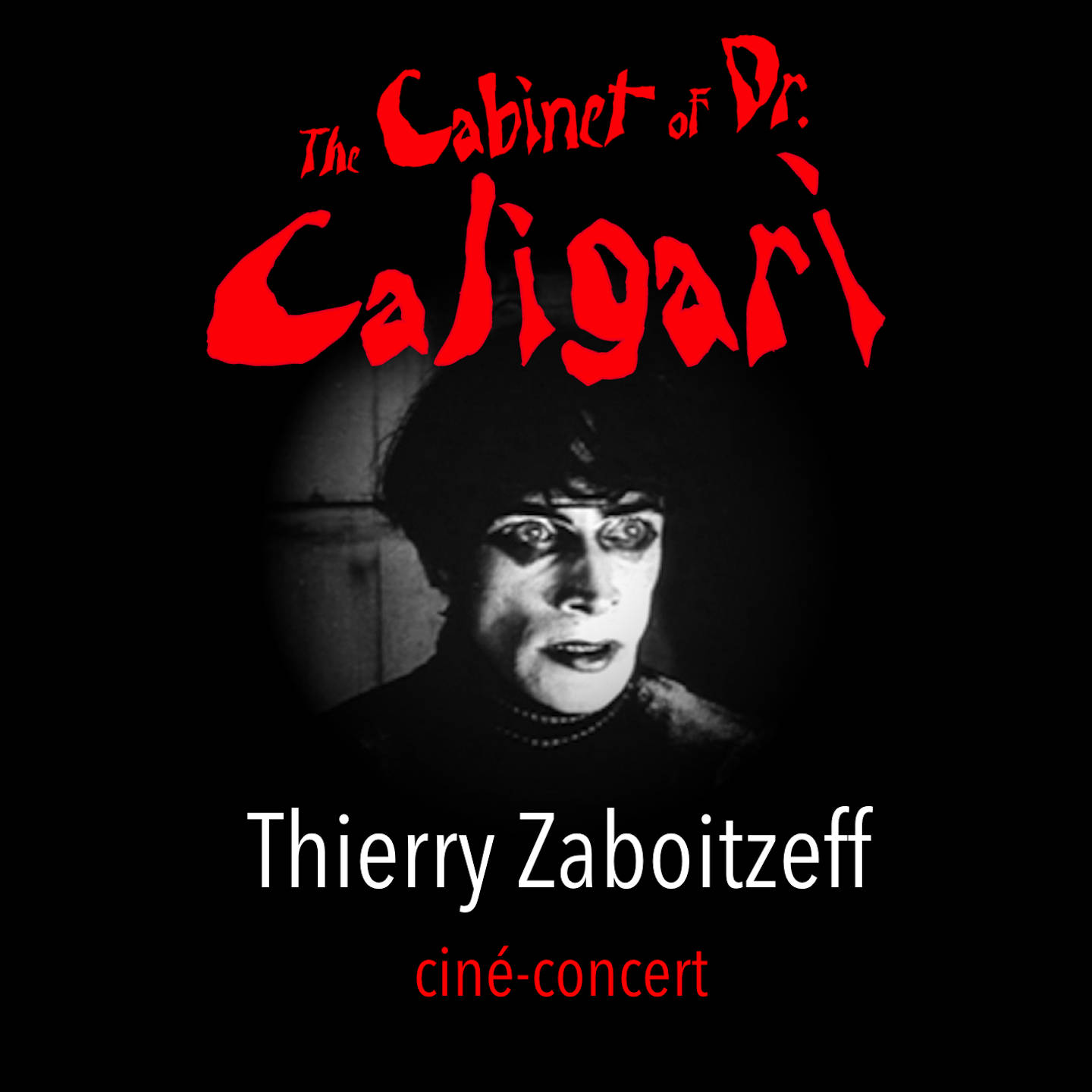 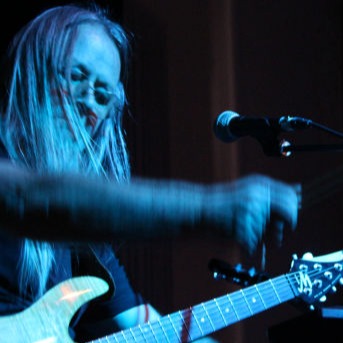 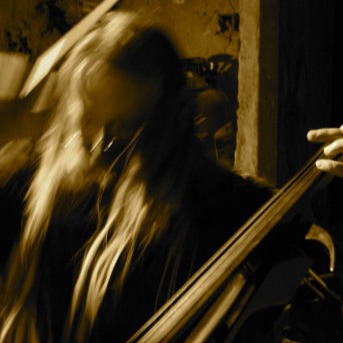 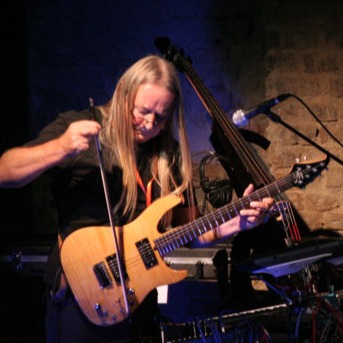 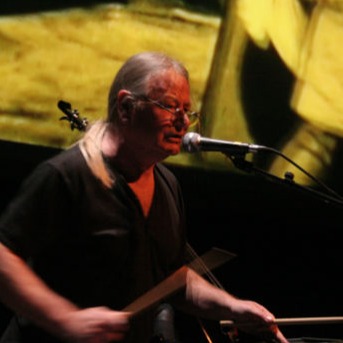 THE STORY
The story is divided into 6 acts. In a travelling fair of the 1830s Dr Caligari is exhibiting Cesare, a sleepwalker. Cesare predicts that Alan, a student in the crowd, will not live past dawn the next day. When Alan is indeed found murdered in his bed the next morning, his friend Francis suspects Caligari of the crime. Cesare next abducts the girl Francis has been courting, but when the local townspeople give chase he abandons her and collapses. Francis pursues Caligari, who takes refuge in a lunatic asylum. Caligari is revealed to be the director of the asylum, while Francis and the girl are in fact his patients.


ABOUT THE MOVIE
The Cabinet Of Dr. Caligari, about which more has been written probably than any other film, blends fantasy, romanticism, medieval stories and philosophic fable into a story of mind-control, murder, and insanity. Its painted backgrounds, sets and costumes were in the style of the Der Sturm expressionist group, which included the painters Röhrig and Reimann and the designer Hermann Warm, all three of whom contributed to the art direction of the film. It is in many respects still filmed theater, a series of tableaux or "living drawings" (Der Sturm). In the ongoing controversy over definitions of German Expressionist Cinema, Caligari has long been the key work by which other films have been measured. For some critics, however, it can only be considered a precursor of "expressionism" in cinema, even German cinema; rather it is the instigator of a much narrower cinematic style, its own "Caligarism."

ABOUT THE MUSIC
After recording live music between 1989 and 1996 with his band Art Zoyd for the films Nosferatu (Murnau), Faust (Murnau) and Hâxan (Christensen), fifteen years later Thierry Zaboitzeff once again sets off to tackle a new project.
This time he is alone on the stage, surrounded by a complete arsenal of high-tech equipment yet including his favourite instruments: cello, bass, percussion, guitar and his voice.
In the midst of this forest of instruments, cables and electronics, Zaboitzeff sees himself not only as a puppet master, sound artist and creator of soothing sound spaces, but as a composer in the more traditional manner, who understands how to deliver to us reference points and recognizable themes out of a film and sound delirium.
His music unfurls like an opera score, in a precise, complex-free poetry and joins together in a completely natural way with the electronic rock sound which Thierry Zaboitzeff has been developing for years.
At times the actors seem to step out of the screen and mingle with the live musician, to tell us their story, to tell us stories … because this music pierces through many layers and so leads us into Dr. Caligari’s cabinet, the inevitable benchmark of German Expressionist cinema.

Extract of a text written by Claus Löser about the 1st International Caligari Festival.
ON THE WAY TO CALIGARIA
We, the owners of the ‘Brotfabrik’ in Berlin, have engaged ourselves for quite some time with the history of the early German silent movies. Our house is situated in Weißensee, a district in the northeast of the old and new capital. In 1919 ‘The Cabinet of Dr. Caligari’ was filmed here, a few streets away from our cultural center. At that time Weißensee was the home of the biggest film production industry in Germany. Joe May, Fritz Lang, Harry Piel, Gerhard Lamprecht, Richard Oswald, and Georg Wilhelm Pabst worked here, as well as the creators of ‚Caligari’. To call attention to this forgotten cinematic chapter we started ‘Somnambule’, the ‘First International Caligari Festival’. With the support of the Hauptstadtkulturfonds (Berlin Cultural Fund) and other sponsors we were able to offer a multifaceted program with exhibitions, theater performances, discussion groups and, of course, film screenings. The Festival opened on September 9th, 2010 for a ten day run and it was clear that we needed a special event for the opening night.
Therefore we engaged Thierry Zaboitzeff to compose a new score for the classic German silent movie. We were familiar with his work with the French avant-garde rock band ‘Art Zoyd’ and with some of his solo projects. The artist seemed ideal. As a Frenchman he could view the German material with a more distant eye, besides he already had comprehensive experience with silent movies. The results he presented on September 9th exceeded all our expectations. Zaboitzeff composed music which works even without pictures and together with the movie builds to a dramatic chamber opera which discharges intoxicating moments again and again. He deftly deals with the principle difficulty in composing scores for silent movies, coordinating the ‘illustrative’ character of the sounds to the pictures. He begins as a self-ironic master of ceremonies, at times accentuating the carnival atmosphere of the film (it’s triviality, the pretentious conduct of the main character, it’s ever-present pathos), and then sets surprising counterpoints which depart completely from the events on the screen. He found a motif for the insane Dr. Caligari which constantly runs through one’s head. The plot’s ambiguousness and characters are knit together with treacherous, labyrinth sound tapestries which, in the moment we get used to them, are pulled out from beneath us. Zaboitzeff’s own quotes flash up, he plays with sounds from nature and as a complete surprise: sung passages trailblaze through. His composition is unbelievably precise without seeming sterile. The multi-instrumentalist plays for 80 minutes with utmost concentration, creates a second stage next to the film one. In the famous closing scene – where the asylum’s patients are presented as a human panopticon - he doesn’t underlay curious music for this curious scene - instead he layers the pictures with deep sadness and compassion. Thierry Zaboitzeff’s variation of ‘The Cabinet of Dr. Caligari’ is a highly current, interdisciplinary event which will certainly have a long afterlife. 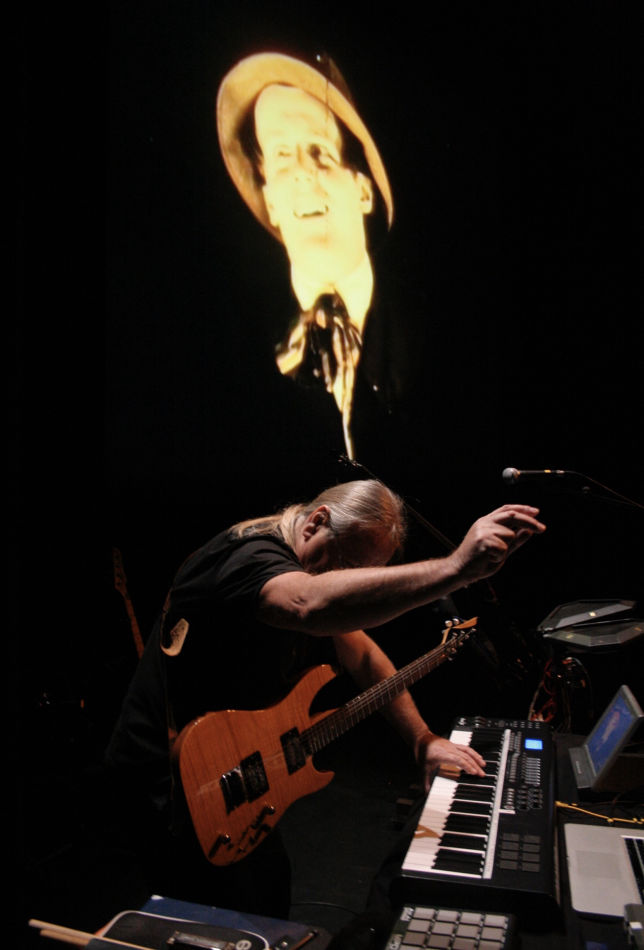 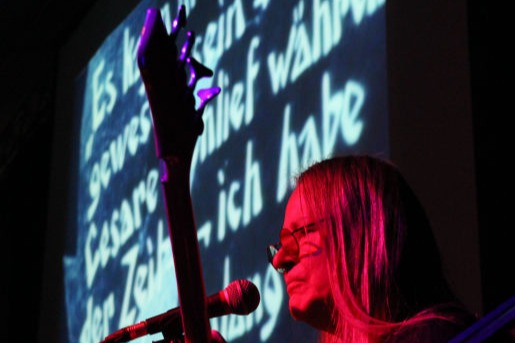 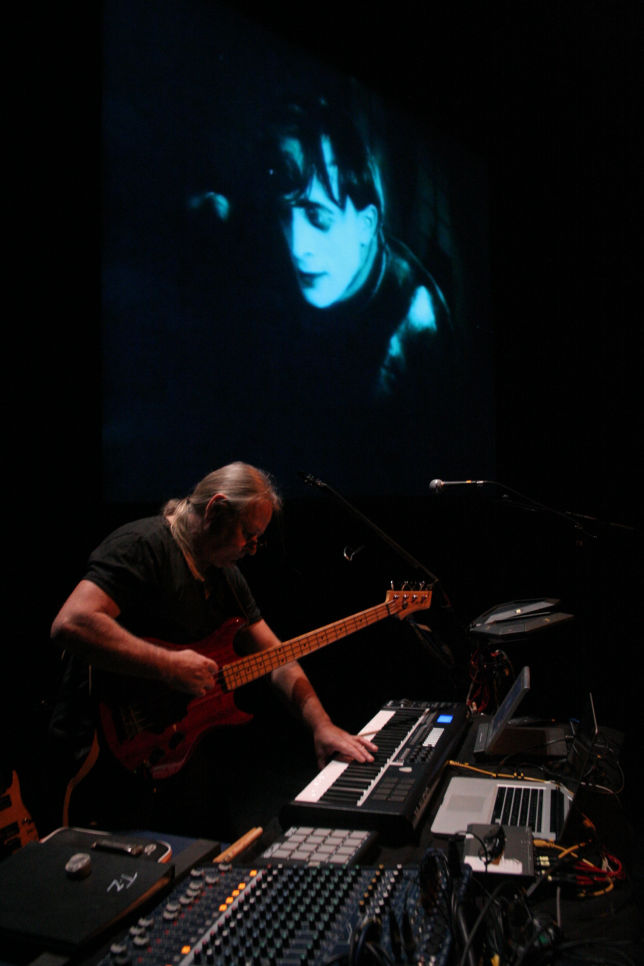 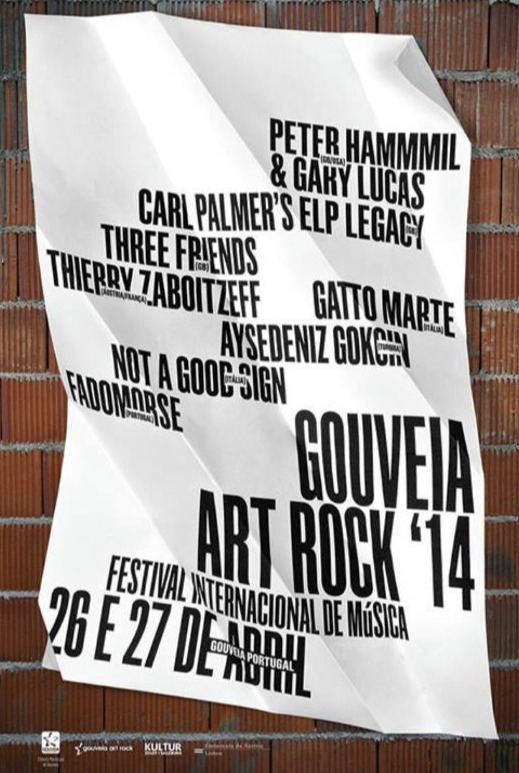 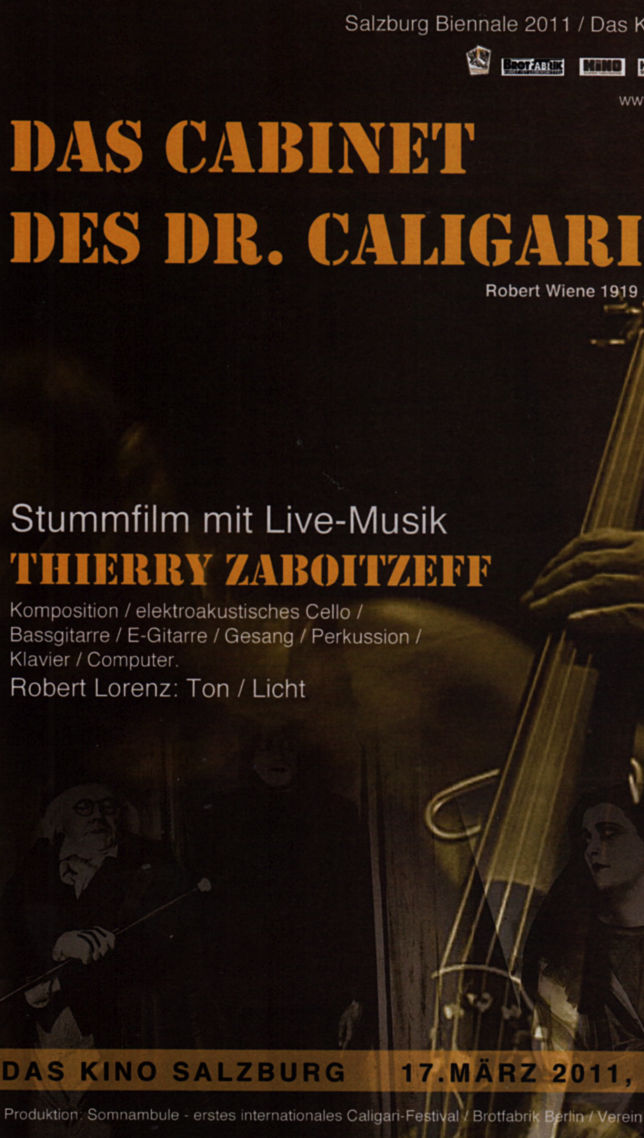 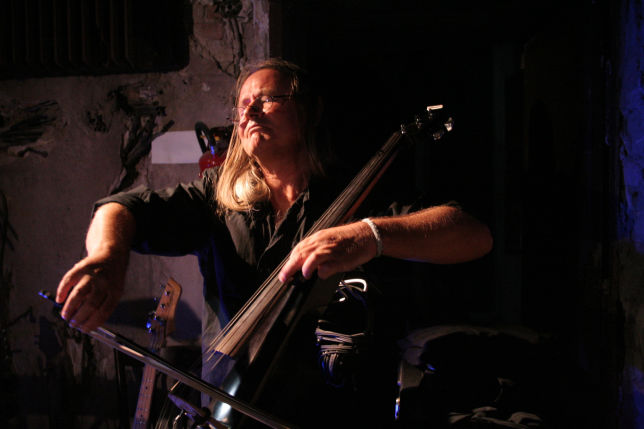 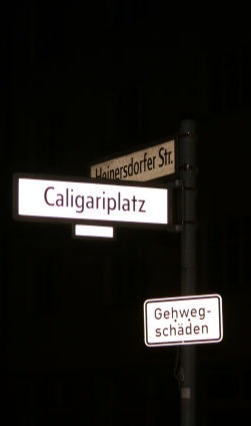 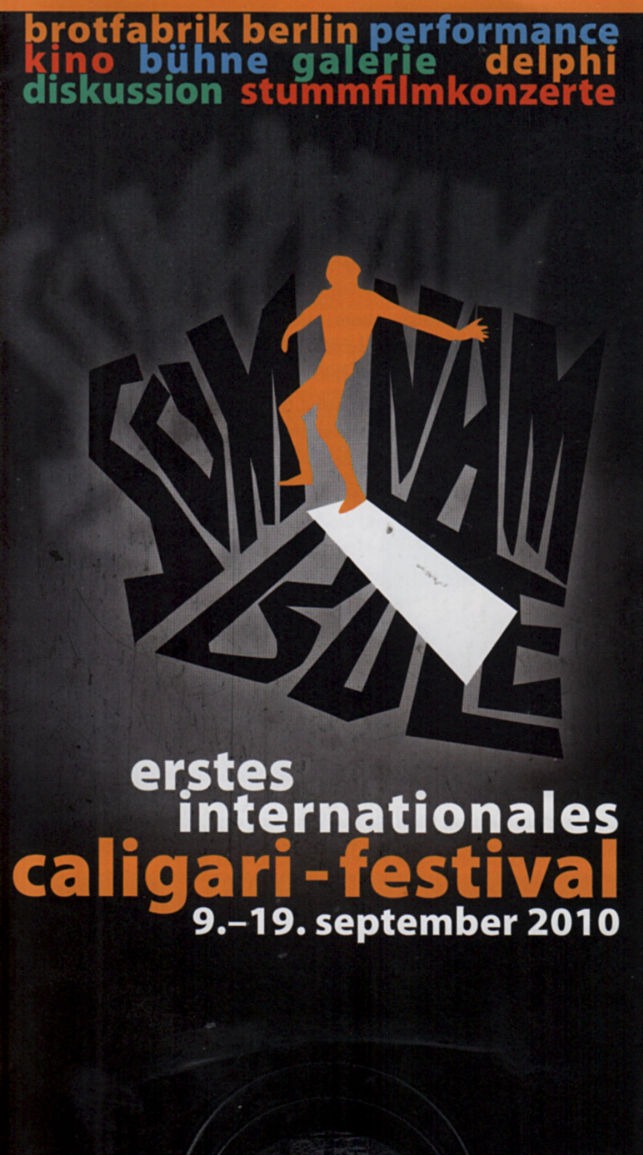