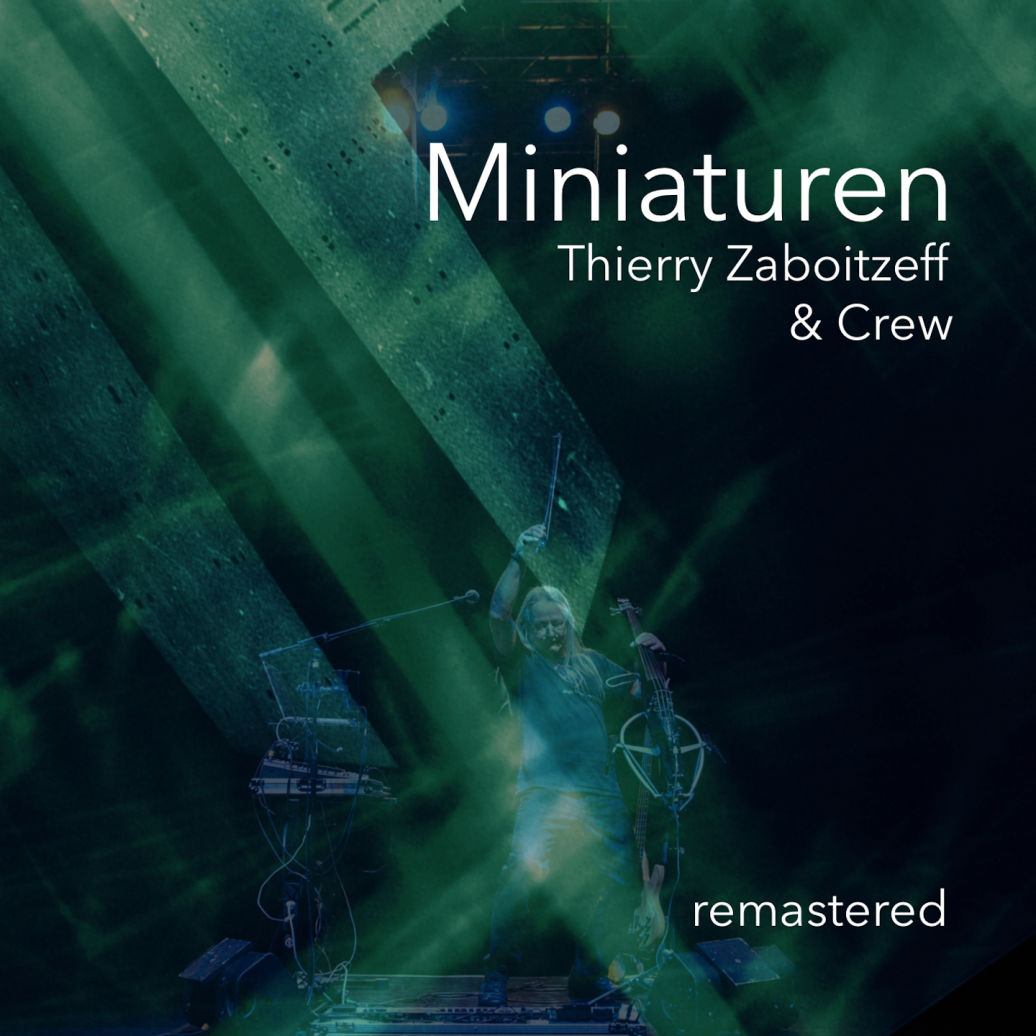 Originally recorded and mixed for Atonal Records by Thierry Zaboitzeff at Heartbeat Studio/Salzburg.
Live parts recorded by Robert Lorenz while touring in October 1999.
"Miniaturen - dance piece for 9 female dancers and 18 winter-coats" has been created by editta braun company / Zaboitzeff & Crew in 1999 for the openning of "Salzburg Festspiele".

back > albums buy the original CD 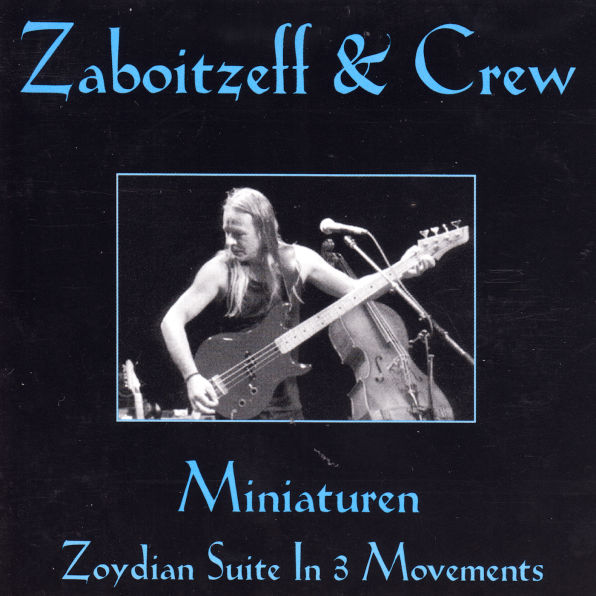 After he left Art Zoyd, Thierry Zaboitzeff worked mostly solo, composing music for various dance theater productions. Three of these – Heartbeat (1997), India (1998) and Alice (1999) – are included in the cd being reviewed here. Unfortunately, these works don’t always manage to capture the listeners attention without the visual support.

Zaboitzeff augmented his production of ‘Miniaturen’ in 2000 by colleagues Christian Kapun (clarinette) and Peter Angerer (drums) and the cd was labelled ‘Zaboitzeff & Crew’. Although Judith Lehner’s voice can still be heard on some of the tracks, apparently she doesn’t belong to the official band line-up.

‘Zoidan Suite in 3 Movements’ is the subtitle of this work, complemented by ‘Dance piece for 9 female dancers and 18 wintercoats’. Zaboitzeff lines up 40 tracks (condensed into 3 movements and the finale) filled with countless ‘zoydic’ sound fragments. Art Zoyd experts (especially ones who know their albums from Marathonnerre to Häxan) and those familiar with Zaboitzeff’s solo works (especially Dr. Zab & his robotic strings orchestra) will recognize them. New ideas and sounds, bizarre voices (especially Zaboitzeff’s growling song) and the two crew members’ clarinette and percussion playing add a new dimension to the old sound. The recording is powerfully mixed and, especially when enjoyed via headphones, a true tour de force through Zaboitzeff’s soundscape.

Nevertheless we must deduct a few points in the category ‘B grade’ (creativity). Overall, this cd is more or less ‘recycled’, because Zaboitzeff reuses most of the old Zoyd samples without hardly changing anything, so parts of it sound as if he had just remixed tracks from old cds. That said, the old material is still simply brilliant, so even a ‘remix’ is worthwhile. Plus, the addition of two musicians and diverse new ideas leaves much to be discovered on Zaboitzeff’s cd. Nice piece!

I had been waiting for a long time for this to happen. The resurrection of Thierry Zaboitzeff, the wonderful French musician, member during many years of my adored Art Zoyd, who in his last solo album (he has published three since his definitive exit of Art Zoyd in 1997) has abandoned the techno-ethnic caprice completely (shown for example, in the interesting India that nevertheless, was not what one expected) to de- voted himself to what I like more, to develop the experimental RIO side he played for years in Art Zoyd.

This last CD of Thierry is a marvel that recaptures the best and darker essences in the Art Zoyd of the 90s (mainly in some moments that come directly from "Haxan" or "Marathonerre" directly), as the subtitle of the album already indicates ("Zoydian Suite in three movements") and as forty (and one) small, dense and atmospheric mu- sical miniatures.

The group of Thierry is formed in this album by Christian Kapun (clarinets), Peter Angerer (drums) and the own Thierry (cello, bass, guitars, soundscapes, voices and programming), with the help in some miniatures of Judith Lehner's feminine voice.

This "Miniaturen: Zoydian Suite in 3 Movements" is the musical part of “a dance piece for nine dancers and eighteen winter coats" (??), created by Editta Braun's com- pany in 1999 for the opening of the Salzburg festival.

As I have commented previously, the album includes three movements: "Schön" in thirteen parts and 19 minutes, “Zart” in seventeen fragments and 21 minutes and “Kalt” in other ten parts and almost 18 minutes, concluding with the independent piece "Finale" of five minutes of duration.

How can I define these musical miniatures? In general, I can say that the sound gen- erated by the programmed tapes, rhythms and convoluted percussion, gelid passages of electro-acoustic music and the wonderful and lonely clarinet brings us to the ghastly, dark and dense atmospheres created by Art Zoyd or the last albums of the Belgian Univers Zero. It is curious how the musical careers of these two big groups continues to intermingle: in this way for example, Daniel Denis, drummer and main composer of Univers Zero has played in many disks of Art Zoyd and in direct, the same as Michael Berckmanns (oboe and bassoon in UZ), Univers Zero last album is co-produced by Art Zoyd's people, Thierry Zaboitzeff played a song in "Ceux du Dehors" of Univers Zero.

Over this sound base loaded with emotional force, we enjoy devastating floods of guitars and bass, desperate voices full with pain, sweet moments amongst whispers, caresses and choral voices, followed by full outbursts of electricity and dirty noise, uneasiness charged with madness and illness, all kind of ambient sounds (orgasms, wailing, clicks of cameras that act as sound flashes during the different sequences of the suite, animals, water...), even, I swear, I can hear some musical fragments that seem pure metal mixed by the blend of Art Zoyd.

This is pure assonant dissonance, the unhinged world of Lovecraft or Kafka made reality, darkness made contemporary music. Truly I cannot imagine how anyone one can make dance out of this no matter how modern it is, with this music without structures, replete of discontinuity and holes, loaded with surprises, changes, sound mutations, rock, free jazz, contemporary, electronic classic..... a whole world that fits in this fabulous sound bible.

This release shows Thierry to have come full circle in his solo artist work. It reaches back to partake in a dialogue with elements and gestures cultivated from his earliest days in Art Zoyd, all the way through his experiments with sampling and keyboard-centered composition, and up to the present work he has done for dance and theater. The music runs continuously for three separate 20-minute movements (plus a short finale). As with "Heartbeat" Thierry focuses on his bass playing and singing, but this time in a direct, live-performed framework. The contributions of a drummer and clarinetist bring out the colors and demeanor of his compositions in a more vivid and palpable fashion than his purely solo work (and indeed most of his former band's material from the last decade). Along the way themes from past albums, as well as some of Art Zoyd's "Haxan" and others, are revisited and presented under a completely different guise. The closest he has yet come to portraying his music in a band concept, the "Miniaturen" suite represents what I consider to be his finest hour yet.
EXPOSE (USA)
Mike Ezzo