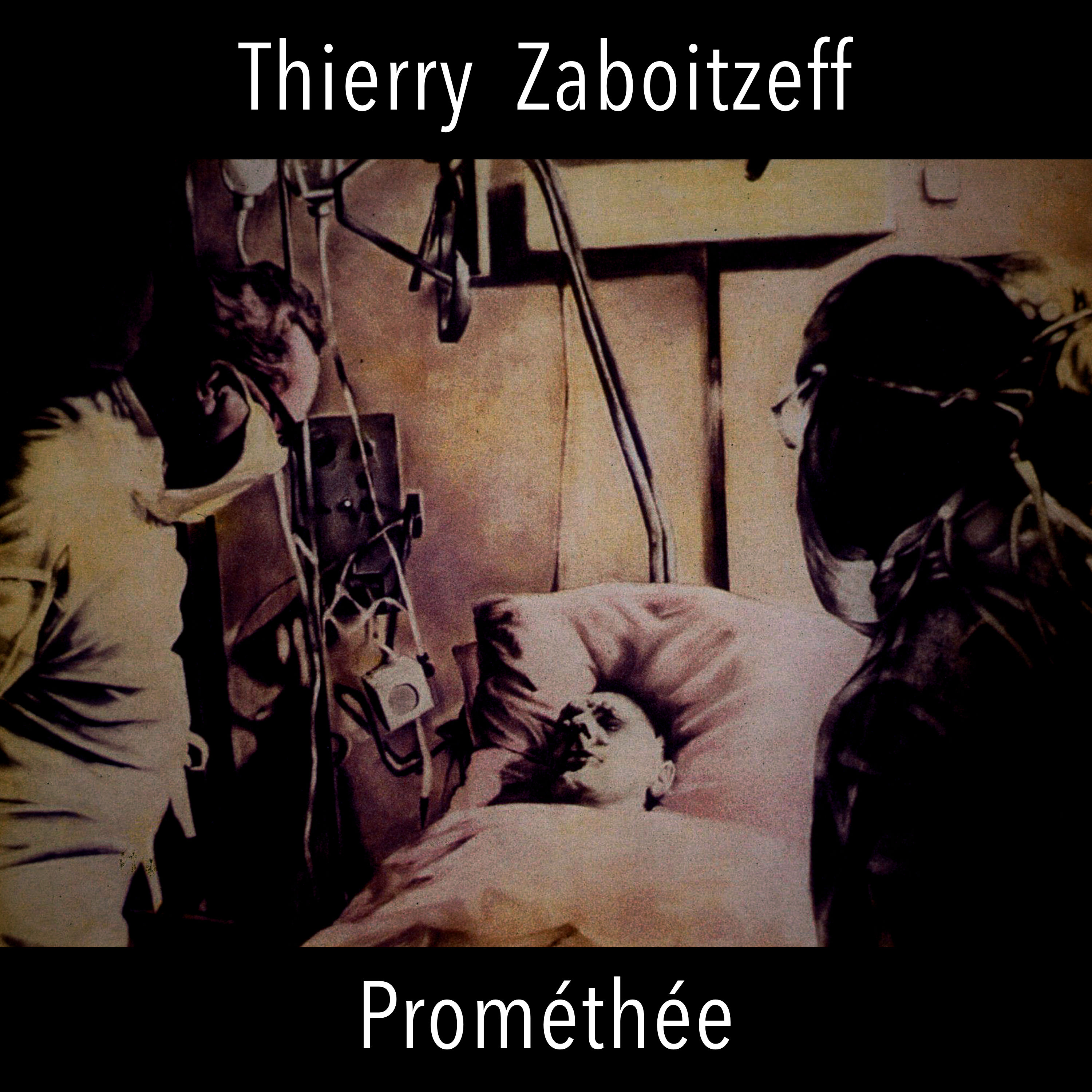 Now, in the same cutout as the original vinyl record. Originally published on vinyl by Madrigal Records (F), Prométhée is a music from "Aeshilus Prometheus" performed by "le Collectif Théâtral du Hainaut" Composed,recorded and mixed by Thierry Zaboitzeff (1984)
Remastered for a CD version by Thierry Zaboitzeff for Margen Records (2005)
This album was also in digital distribution at Booster/Believe since 2009.

Prométhée
In 1984 the bassist, cellist, keyboarder and innovator of electronic sounds, Thierry Zaboitszeff, who has been a leading member of the Northern French RIO-Chamberprogformation Art Zoyd since the mid-1970’s, released his first solo album. The two numbers from ‘Prométhée’ originate from the score of the dance theater piece ‘Aeschilius’ Prometheus’, which Zaboitzeff composed for the Collectif Theatral Du Hainault. Zaboitzeff did almost everything himself, as with nearly all of his future solo albums. He played all the instruments – except the saxophone which surfaces now and then, played by Art Zoyd band colleague Didier Pietton – as well as doing all the mixing and production work.

In terms of music, Zaboitzeff’s first solo excursion doesn’t differ much from the compositions found in the later ‘Le Marriage du Ciel et de l’Enfer.’ Anyone who is familiar with the Art Zoyd albums will recognize the similaritiy in the beginning of ‘Part Two’. Zaboitzeff presents a simpler and more electronic sound than Art Zoyd’s, the music seems more uniform, but in places more hypnotic, almost like music to a strange, electro-acoustic ritual. Now and then the whole thing peters out, with long, ethereal sounds that drift, shimmer and plink, splashing without contour out of the speakers, and moments when the music paces statically, without really getting anywhere. Otherwise one is offered complex-offbeat, drifting-bizarre Chamberprog, vibrant sound constructions, complicated tonal collages dominated by bass, guitars, cello and keyboards, supplemented by several percussive structures as well as tape recordings, strange voice recordings and electronic effects. Zaboitzeff uses these interesting sound decorations more and more with Art Zoyd and in later solo works.

In comparison to Zaboitzeff later solo works, ‘Prométhée’ seems somewhat unripe and pieced-together. But nevertheless, this album has a much more experimental focus than later works along with a sympathetic, raw charm. Art Zoyd fans, especially those who favor the before-mentioned ‘Le Marriage du Ciel et de l’Enfer’, should lend their ears to ‘Prométhée’, which was released as a CD in 2005.

Prométhée
Thierry Zaboitzeff was one of the two key members of ART ZOYD along with Gerard Hourbette. Both played keyboards while Thierry also payed bass and cello, while Gerard added violin and electronics. Thierry's first studio album from 1984 called "Promethee" hints at ART ZOYD at times but never reaches their level in my opinion. By the way Thierry has released around 15 studio albums so far and on this the debut he is the producer, mixer, composer and recorder of all the music. We do get some guest sax and female vocals. I understand the original vinyl release had two side long suites while the cd re- issue breaks down each suite into seven parts.

On Part 1 we get just over 19 minutes of music beginning with a dark atmosphere with percussion and electronics. Vocal expressions arrive around 2 minutes then organ after 4 minutes followed by sax. The next section is ART ZOYD-like with those strange sounds in a creepy soundscape. Next is a passage that sounds off in the distance including samples or electronics. The first real outburst happens in section "D" but they are shrill sounds with a ticking sound and more. Church bells late. Next is picked guitar, drums and more. I like this section. Percussion and a mysterious vibe follow in section "F" as strings join in. The final section of the first suite is a very short piece of percussion and sax.

Part 2 begins with an eerie soundscape full of suspense and this continues for the first three sections with male vocal melodies arriving on the third section "C". Faint sounds begin in part "D" that click, ping and beat as electronics come and go. It's even quieter on the next section until we get to "F" my favourite section. The guitar cries out over another soundscape that's full of suspense. Great stuff! The album ends with a short haunting piece with strange sounds.

I really wanted to love this album being a huge ART ZOYD fan but it's quite minimalistic and when it does break out I'm not that into it. I've listened to this longer than I do most albums just trying to get a grasp on it without much success.
Progarchives.com
Review by Mellotron Storm. Posted Saturday, June 11, 2016